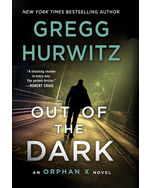 Evan Smoak was trained as an assassin in the secret Orphan Program. Now the government is eliminating every trace of the Program by killing its participants. Evan, who was Orphan X, strikes back against the Program’s founder: the President of the United States. But President Bennett counters by setting the Program’s first recruit, Orphan A, against Evan. As Evan tries to penetrate the security surrounding the President, he must also protect himself against a deadly opponent. It's Orphan vs. Orphan with the future of the country — even the world — at stake.