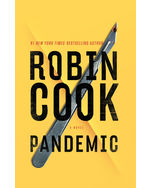 When an unidentified, seemingly healthy young woman collapses suddenly on the New York City subway and dies upon reaching the hospital, M.E. Jack Stapleton must race against the clock to identify the woman and determine what kind of virus could wreak such havoc — a task made more urgent when two other victims succumb to a similar rapid death. But nothing makes sense until his investigation leads him into the fascinating realm of CRISPR/CAS9, a gene-editing biotechnology that's captured the imagination of the medical community.