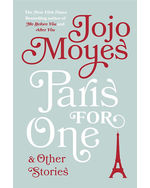 Paris for One and Other Stories

Nell is twenty-six and has never been to Paris. She's never even been on a romantic weekend away — to anywhere — before. Traveling abroad isn't really her thing. But when Nell's boyfriend fails to show up for their mini-vacation, she has the opportunity to prove everyone — including herself — wrong. Alone in Paris, Nell finds a version of herself she never knew existed: independent and intrepid. Could this turn out to be the most adventurous weekend of her life? Funny, charming, and irresistible, Paris for One is quintessential Jojo Moyes — as are the other stories that round out the collection.

“Vibrant . . . Bold, humorous and genuine, the stories in this collection are classic Moyes.”

“These stories are a treat quick, short nibbles of Moyes’ character genius, storytelling charisma, and writing grace, plus a new, intriguing format for the author, with the occasional surprising twist.”

“An old-fashioned, feel-good love story . . . [Paris for One is] as light as a French pastry. It will make you smile and even, maybe, sigh. It’s as if Moyes has booked a vacation and is taking us along. To Paris. Amour! . . . Think of these short fictions as palate cleansers after the sweet, tasty Parisian treat Moyes so deliciously serves up.”