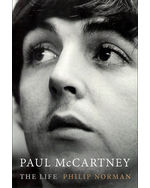 Since the age of twenty-one, Paul McCartney has lived one of the ultimate rock-n-roll lives played out on the most public of stages. Now, Paul's story is told by rock music's foremost biographer, with McCartney's consent and access to family members and close friends who have never spoken on the record before. Paul McCartney reveals the complex character behind the façade and sheds new light on his childhood — blighted by his mother's death but redeemed by the father who introduced him to music.

"Nothing less than thrilling . . . the definitive biography."