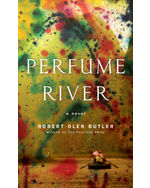 Historian Robert Quinlan and his wife are tenured professors at Florida State University. Their marriage, forged in the fervor of anti-Vietnam-war protests, now bears the fractures of time. For them the cracks remain under the surface, unlike the divisions in Robert’s own family: his brother became estranged from the family as the Vietnam War intensified.

“A deeply meditative reflection on aging and love, as seen through the prism of one family quietly torn asunder by the lingering effects of the Vietnam War.”

“Butler’s Faulknerian shuttling back and forth across the decades has less to do with literary pyrotechnics than with cutting to the chase. Perfume River hits its marks with a high-stakes intensity . . . Butler’s particulars on the two brothers’ marriages are comprehensively adroit . . . Butler’s prose is fluid, and his handling of his many time-shifts as lucid as it is urgent. His descriptive gifts don’t extend just to his characters’ traits or their Florida and New Orleans settings, but to the history he’s addressing . . . ‘You share a war in one way,’ Robert thinks. ‘You pass it on in another.’ Perfume River captures both the agony and subtlety of how that happens.”