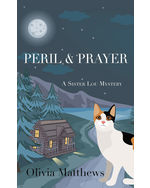 This year’s Advent retreat has been booked for the Congregation of the Sisters of St. Hermione of Ephesus at the pastoral Briar Coast Cabin Resorts in New York. But when the combative Sister Marianna practically loses her religion arguing over minor details with resort co-owner Autumn Tassler, Sister Louise “Lou” LaSalle blessedly steps in as peacemaker.

Only days later, Autumn is found strangled in her office, and hot-headed Sister Marianna becomes the sheriff’s deputies’ prime suspect. They believe her missing scarf may be the murder weapon, but Sister Lou believes Sister Marianna’s being framed. If she has a prayer of keeping Sister Marianna out of prison, she’ll need to once again put her faith in her nephew Chris LaSalle and reporter Shari Henson to help her solve the case. As the trio tries to cross suspects off the list, Sister Lou has no choice but to stick her neck out — if she’s going to unveil who was desperate enough to resort to murder . . .