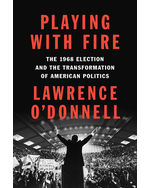 Playing With Fire: The 1968 Election and the Transformation of American Politics

The 1968 U.S. Presidential election was the young Lawrence O’Donnell’s political awakening, and in the decades since it has remained one of his abiding fascinations. For years he has deployed one of America’s shrewdest political minds to understanding its dynamics, not just because it is fascinating in itself, but because in it is contained the essence of what makes America different, and how we got to where we are now. Playing With Fire represents O’Donnell’s master class in American electioneering, embedded in the epic human drama of a system, and a country, coming apart at the seams in real time.