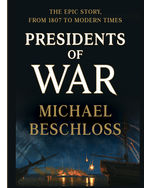 Widely acclaimed and ten years in the making, Michael Beschloss’s Presidents of War is an intimate and irresistibly readable chronicle of the Chief Executives who took the United States into conflict and mobilized it for victory. From the War of 1812 to Vietnam, we see these leaders considering the difficult decision to send hundreds of thousands of Americans to their deaths; struggling with Congress, the courts, the press, and antiwar protesters; seeking comfort from their spouses and friends; and dropping to their knees in prayer. Through Beschloss’s interviews with surviving participants and findings in original letters and once-classified national security documents, we come to understand how these Presidents were able to withstand the pressures of war — or were broken by them.

A monumental and profoundly important achievement.