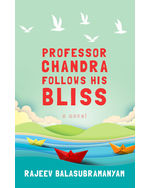 Professor Chandra is an internationally renowned economist, divorced father of three (quite frankly baffling) children, recent victim of a bicycle hit-and-run — but so much more than the sum of his parts.

In the moments after the accident, Professor Chandra doesn’t see his life flash before his eyes but his life’s work. He’s just narrowly missed the Nobel Prize (again), and even though he knows he should get straight back to his pie charts, his doctor has other ideas.

All this work. All this success. All this stress. It’s killing him. He needs to take a break, start enjoying himself. In short, says his doctor, he should follow his bliss. Professor Chandra doesn’t know it yet, but he’s about to embark on the journey of a lifetime.