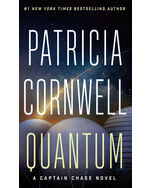 On the eve of a top-secret space mission, Captain Calli Chase — a NASA pilot, quantum physicist, and cybercrime investigator — detects a problem in the tunnels below a NASA research center. She discovers dried blood, a missing security badge, and a suspicious suicide. This series of disturbing clues point to Calli’s twin sister, Carme, who’s been missing for days. Desperate to avoid disaster and clear her sister’s name, Captain Chase races to find answers for her twin’s erratic conduct. But time is running out, and she realizes that failure means catastrophe — for both the space program and the safety of the entire nation.