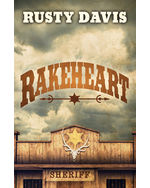 Rakeheart, Wyoming, is a town with troubles. Into its crosscurrents comes Kane, a troubleshooter sent west to learn why ex-army officer Jared Wilkins was killed. Kane encounters hostility at every turn. The rancher’s widow emerges as his prime suspect even as the townspeople who ask him to become sheriff make it clear they are playing a deceitful game. As Kane tries to impose law and order on a town that has its own purposes at heart, he struggles to plumb the depths of Rachel Wilkins, who holds tightly to her own secrets. When the violence erupts, he is left with no allies except Rachel as they wage one fiery battle for the future, and the soul, of Rakeheart.