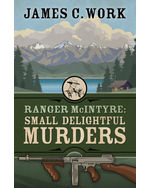 Small Delights Lodge in Rocky Mountain National Park is under siege. Shots fired at the owner, vehicles set on fire, boats sabotaged, electrocution booby traps, and deadfalls set up — and finally arson and murder. RMNP Ranger Tim McIntyre has plenty of suspects, including the owner of a neighboring resort, a rogue park ranger, and some Chicago mobsters who want Small Delights as a prohibition speakeasy. The only help McIntyre can depend on consists of two attractive women, one a highly competent take-charge-and-do-it kind of gal named Polly and the other an FBI secretary with great legs and a Thompson submachine gun.