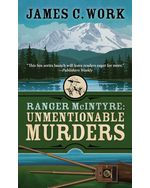 The body they found floating face-down in the river was wearing only underpants. If it’s a fishing accident, then is it a photography accident when a second corpse is discovered at a remote lake wearing nothing but her underwear? Ranger McIntyre’s usual duties as a park ranger do not include murder — or people in underwear, for that matter — but he keeps on putting pieces of the puzzle together until they lead him to a backcountry hut and a murderer who orders him to disrobe. At gunpoint. Meanwhile, the suspect in an FBI investigation is selling salacious photographs of nudes . . . who appear to be very, very dead.