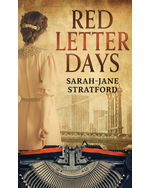 Amid the glitz and glamour of 1950s New York, Phoebe Adler pursues her dream of screenwriting. A dream that turns into a living nightmare when she is blacklisted — caught in the Red Menace that is shattering the lives of suspected Communists. Desperate to work, she escapes to London, determined to keep her dream alive and clear her good name. There, Phoebe befriends fellow American exile Hannah Wolfson, who has defied the odds to build a career as a successful television producer in England. Hannah is now gambling everything in a very dangerous game — hiring blacklisted writers. Neither woman suspects that danger still looms . . . and their fight is only just beginning.

“[A] thoroughly fascinating and too-little-known story of Hannah Weinstein and her role in supporting blacklisted Americans, regardless of gender or race.”

“In this crisp novel, Stratford… effortlessly melds politics, romance, and history. This delivers on every level.”