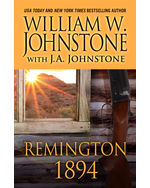 When he was a teenager, John McMasters won the Medal of Honor as a sniper for the Union Army. Thirty years later, raising a family and running cattle in the Arizona Territory, he needs eyeglasses to hit a distant target. Still, his wife and four children buy him a new Remington shotgun for his fiftieth birthday. Turns out, he’s going to need it. By the time McMasters learns the Butcher gang is in town, they’ve slaughtered his family. He wants revenge, and he can’t do it alone. But his friend, a deputy U.S. Marshal, is hauling six deadly criminals to a prison in Yuma . . .