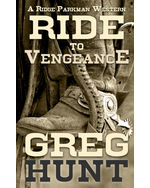 Ben Halpert was a Mississippi hill farmer before the war killed his pa and took Ben as fodder for the Confederate war machine. Tough enough to survive, Ben was smart enough to escape the profiteering Confederate commander who had trampled on his life. With trail-wise companion Ridge Parkman, he tracks Major Salem and his land-stealing marauders to Colorado to face them in a fiery last-ditch stand.