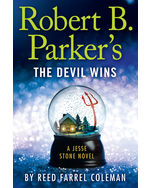 Robert B. Parker's The Devil Wins

In the wake of a huge storm, three bodies are discovered in the rubble of an abandoned factory building. One body, a man’s, wrapped in a blue tarp, is only hours old. But within feet of that body are the skeletal remains of two teenage girls who had gone missing twenty-five years ago. Not only does that crime predate Jesse Stone’s arrival in Paradise, but the dead girls were close friends of Jesse’s right hand, Officer Molly Crane.

“Small town, big secret, and a community's shame. In the blink of an eye, Jesse goes from worrying about potential storm damage to investigating three homicides . . . suspenseful, melancholy examination of loss and how sometimes, despite our best efforts, the past refuses to stay buried, and it will certainly please fans still craving more of Parker's characters.”