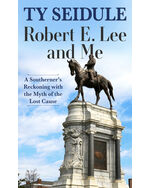 
Robert E. Lee and Me: A Southerner's Reckoning with the Myth of the Lost Cause

Ty Seidule grew up revering Robert E. Lee. From his southern childhood to his service in the U.S. Army, Lee was the greatest man who ever lived, and the Confederates were underdogs who lost the Civil War with honor. Now, as a retired brigadier general and Professor Emeritus of History at West Point, his view has radically changed. Through the arc of Seidule’s own life, he seeks a path to understanding why the facts of the Civil War have remained buried beneath layers of myth and even outright lies — and how they embody a cultural gulf that separates millions of Americans to this day.

“Our assumptions about whose tensions, desires, rages, and shy longings might erupt into murder are provoked and reversed right up until the final pages.”

“Harrowing and heartrending, this is a novel that is almost impossible to put down.”