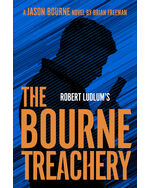 Three years ago, Jason Bourne embarked on a mission in Estonia with his partner and lover, a fiery UK-based Treadstone agent code-named Nova. Their job was to rescue a Russian double agent. They failed. Now, everything has changed for Bourne. Nova is gone, killed in a mass shooting in Las Vegas, and Bourne is a lone operative working for Treadstone when he’s called in for a new mission in London. But nothing is what it seems, and Bourne discovers that everything he thought he knew about the past was a lie. He comes to the inevitable conclusion that some secrets should stay buried.

“Freeman supplies plenty of exciting fight scenes and plot twists, but his convincing use of Bourne’s fraught backstory is what distinguishes this entry.”