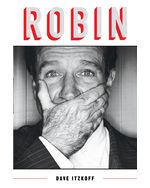 From his rapid-fire stand-up comedy riffs to his breakout role in Mork & Mindy and his Oscar-winning performance in Good Will Hunting, Robin Williams was a singularly innovative entertainer. But his comic brilliance masked a deep well of conflicting emotions and self-doubt, which Williams drew upon in his comedy and his celebrated film roles. Drawing on more than a hundred original interviews and extensive archival research, New York Times culture reporter Dave Itzkoff offers a compelling portrait of one of America’s most beloved and misunderstood entertainers, whose performances and personality touched so many lives.