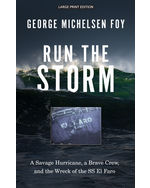 Run the Storm: A Savage Hurricane, a Brave Crew, and the Wreck of the SS El Faro

On October 1, 2015, the SS El Faro, a massive American cargo ship disappeared in Hurricane Joaquin, a category 4 storm. The ship, its hundreds of shipping containers, and its entire crew plummeted to the bottom of the ocean, three miles down.

Relying on Coast Guard inquest hearings, as well as on numerous interviews, George Michelsen Foy brings us a story that lasts only a few days, but which grows almost intolerably suspenseful as deep-rooted flaws leading to the disaster inexorably link together and worsen. We see captain, engineers, and crew fight for their lives, and hear their actual words (as recorded on the ship’s black box) while the hurricane relentlessly tightens its noose around the ship. We watch, minute by minute, all that is happening on board — the ship’s mysterious tilt to one side, worried calls to the engine room, ship-to-shore reports, the courage of the men and women as they fight to survive, and the berserk ocean’s savage consumption of the massive hull. And through it all, the pain and ultimate resilience of the families of El Faro’s crew.