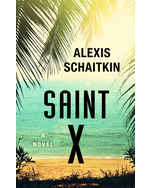 When Claire is seven years old, her college-age sister, Alison, is murdered on the Caribbean island of Saint X. Two local men are arrested but later released, and the lurid, unsolved mystery becomes tabloid news. Years later, Claire has a brief but fateful encounter with Clive Richardson, one of the original suspects. This meeting sets Claire on an obsessive quest to find out what happened the night of Alison’s death and also to discover who her sister really was. As Claire shadows Clive, hoping to gain his trust, waiting for the slip that will reveal the truth, an unlikely attachment develops between these two people whose lives have been marked by the same tragedy.