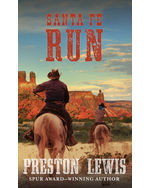 Morgan Garrett’s western sojourn continues in New Mexico Territory when he takes a clerk’s job at the sutler’s store at Fort Bansom, a U.S. Cavalry outpost manned by buffalo soldiers and commanded by a crooked colonel. Before long on the job, Garrett figures out the commander is looking the other way and pocketing kickbacks from the sutler’s manipulation of government contracts. When he realizes the colonel sees him as a threat, Garrett makes a run to Santa Fe to alert the territorial authorities. In a race against death, Garrett must outride both the cavalry on his tail and a band of Apaches led by the fierce warrior Pachise.