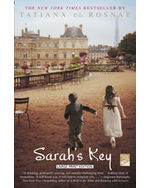 A New York Times Bestseller
Film rights have been optioned.

Paris‚ July 1942: Ten-year-old Sarah is brutally arrested with her family in the Vel’ d’Hiv’ roundup‚ the most notorious act of French collaboration with the Nazis. But Sarah has locked her brother in their favorite hiding place and kept the key‚ thinking she will return soon.

Paris‚ May 2002: On Vel’ d’Hiv’s sixtieth anniversary‚ American journalist Julia Jarmond stumbles onto a trail of long-hidden family secrets that connects her to Sarah.

“Masterly and compelling‚ it is not something that readers will quickly forget.”— starred‚ Library Journal