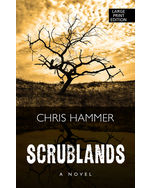 In an isolated rural community afflicted by an endless drought, a young priest does the unthinkable, killing five parishioners before being taken down himself. A year later, accompanied by his own demons from war-time reporting, journalist Martin Scarsden arrives in Riversend to write about how the townspeople are coping as the anniversary of the tragedy approaches. But as Martin meets the locals and hears their stories, he begins to realize that the accepted wisdom — that the priest was a pedophile whose imminent exposure was the catalyst for the shooting, a theory established through an award-winning investigation by Martin’s own newspaper — may be wrong.