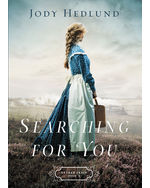 Sophie Neumann has been taking care of two children, trying to keep them away from the orphanages of 1850s New York City. After witnessing a crime, Sophie flees the state, taking her two young charges and joining an orphan train heading west. But now she faces the agonizing possibility that the orphans will be placed in new homes. Sophie finds unexpected help in the form of Reinhold Weiss, who now owns a farm. Reinhold has mounting debts, a harvest to bring in, and a haunted past, but can he say no when his long-lost friend shows up pleading for his help?