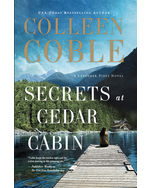 After her mother’s murder, Bailey Fleming escapes to a cabin in Lavender Tides. But then bodies linked to a human trafficking ring are discovered near her hideout. As Bailey attempts to evade the murderer and understand the mystery of her past, she forms an unlikely partnership with FBI agent Lance Phoenix. Meanwhile, Lance is determined to rescue his sister, Ava, who was abducted as a teenager runaway. But he wonders about Bailey’ strange connections to his sister’s case: is she really who she claims to be, and can she somehow lead him to Ava?