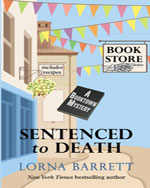 On Founder’s Day in Stoneham, the whole village has turned out to celebrate in the square, including Tricia’s friend and festivities organizer Deborah Black. As everyone watches Deborah give the opening speech, a small aircraft crashes into the village gazebo, killing both Deborah and the pilot. While the Sheriff’s Department is convinced that it was an accident, Tricia has a feeling that there’s more to the story. And when she reads between the lines of the case, what she finds is worse than the most sinister whodunit.