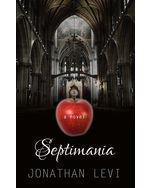 Septimania, Jonathan Levi’s first novel since his 1992 critically acclaimed debut A Guide for the Perplexed, is a major work ― a story at once personal and mythic, with themes as large as the universe and as small as an apple seed, unifying everything.

“A genre-defying philosophical fable that is so ambitious (with references to Charlemagne, Dante, Newton and the Arabian Nights), one marvels with jaw-on-the-floor delight how completely it is all distilled into a single, profound, masterful narrative. The result is something beyond a novel, more pure expression of the human condition. For fans of David Mitchell and Michael Chabon.” — Bill's Bookshelf Selector, Bill Kelly

“Highly intelligent, insanely ambitious, and restlessly imaginative, Levi’s novel is also so recondite that any attempt to accurately describe its plot risks sounding like madness . . . Levi’s vast creation pays off once you give in to its unique fusion of history, music, and the origin of belief in invisible things.”

“[L]aced with philosophy and wit. A thoroughly intellectual postmodern fable, wise yet melancholy, meant to be read slowly and savored.”