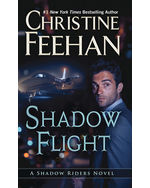 Nicoletta Gomez was a terrified teenager when Taviano Ferraro and his brother saved her life. Since then, she’s molded herself into a survivor under the protective eyes of the Ferraro family. But she’s also fallen hopelessly in love with the man who knows her darkest secrets. With one look, Taviano knew that Nicoletta was his, just as he felt their shadows connect — but he knew she needed time to become her own woman. When Nicoletta once again finds herself in the sights of dangerous men, Taviano breaks all of the Ferraro family’s rules to keep her safe. And as far as he’s concerned, the reward is more than worth the risk.