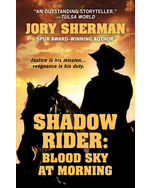 Those who inhabit the harsh, beautiful, blood-red land between Tucson and Fort Bowie have never seen the like of the Shadow Rider — who appears out of nowhere and vanishes just as suddenly in the desert heat. Now death and lies surround him again. The Apache are under siege for murders they didn't commit — and Cody's riding hell-for-leather into a war where nothing's what it seems. But his mission is to get to the truth . . . and to kill the cause of the bloody chaos — even if it means laying down his own life.