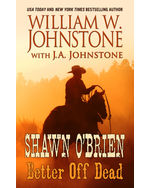 From America's bestselling Western authors comes the frontier legend known as the Town Tamer: the man who appears when justice has fled.

On the West Texas border a behemoth bellows smoke, fire and death. The Abaddon Cannon Foundry’s weapons of war have made a few men in Big Buck, Texas, incredibly rich. Now, a Mexican-born teenager has disappeared into the fortress factory, where men work as slaves. But his sister happens to know a man named Shawn O’Brien . . .