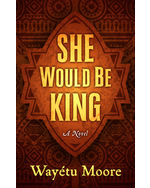 She Would Be King

The dramatic story of Liberia’s early years reimagined through three unforgettable characters. Gbessa, exiled from her West African village, is starved, bitten by a viper, and left for dead, yet still survives. Raised on a Virginia plantation, June Dey hides his unusual strength until a confrontation with the overseer forces him to flee. Norman Aragon, child of a white British colonizer and a Jamaican Maroon slave, can fade from sight when the earth calls him. When the three meet in the settlement of Monrovia, their gifts help to salvage the tense relationship between African American settlers and the indigenous tribes as a new nation forms around them.