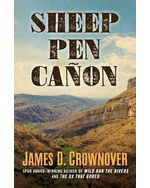 Lee Sowell tells us about the Pard Newman battles — which nearly cost him his life — in this sequel to The Ox That Gored. It takes three battles, one in the Long Branch Saloon of Dodge City, one in Texas, and one in the Territory of New Mexico to finally subdue the Newman gang. The journey back to Sheep Pen Cañon is interrupted by a fight in the infamous Kansas City Bottoms of Joplin, Missouri and by the county seat war of Gray County, Kansas. Tex has to deal with cattle thieves and blue northers while recovering from a wound received in the Long Branch fight. The unseen presence of a ghostly thief and killer upsets the tranquility of the Cimarrón Valley.