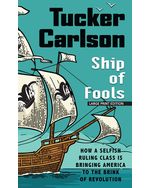 Ship of Fools: How a Selfish Ruling Class Is Bringing America to the Brink of Revolution

FOX News star Tucker Carlson tells the truth about the new American elites — a group whose power and wealth has grown beyond imagination even as the rest of the country has withered. The people who run America now barely interact with it. They fly on their own planes, ski on their own mountains. They have total contempt for you. Traditional liberals have been replaced by globalists who hide their economic agenda behind smokescreen of identity politics. In Tucker Carlson’s signature witty style, Ship of Fools answers the question: How do we put the country back on course?