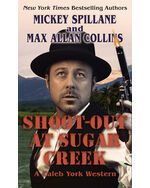 A young scoundrel gets what he deserves from the blazing .44 of Sheriff Caleb York. The lawman doesn’t regret taking such deadly action, but the late youth’s powerful mother seems bound to feel differently. To York’s surprise, she takes the news with stoic resignation — all she asks of him is to help her convince Willa Cullen to sell her the spread Willa’s late father had carved out of the wilderness. York anticipates an ugly showdown and before he can stop it from escalating, he finds himself caught in the crossfire of a shoot-out. No matter who wins, it’s going to be a bloodbath.