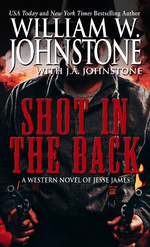 Shot in the Back

A new twist on the legend of notorious outlaw Jesse James — who just might not have died on that fateful day of April 3, 1882.

Granbury, Texas, 1942. A ninety-five-year-old man walks into a recruiting office to enlist. He claims to be the one and only Jesse James, the infamous bank robber allegedly shot by Robert Ford sixty years earlier. Using another man’s corpse to collect the reward, Ford allowed James to slip away and start a new life. So begins the wildest story the West has never known, proving that some legends are bigger than life — and a lot harder to kill.