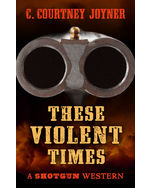 Outlaws left him with one arm, which he replaced with a specially rigged .12 gauge shotgun. Now Dr. John “Shotgun” Bishop cures evil one barrel at a time. But even in the darkest days of the Civil War, he never saw anything like the new scourge of germ warfare. Diseased corpses dumped in wells, midnight raids bombarding women and children with infected blood, spreading plague through the Cheyenne nation. The culprits are led by Shotgun’s one-time protégé, a doctor driven insane by the war. And when the psychopath frames Shotgun for the plague-murders, he has only one choice to stop him: load up — and start shooting.