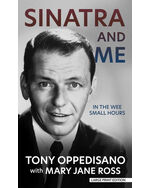 
Sinatra and Me: In the Wee Small Hours

From Frank Sinatra’s closest confidant and an eventual member of his management team, Tony Oppedisano, comes an intimate look at the singing idol. Deep into the night, for more than two thousand nights, Frank and Tony would converse — about music, great loves, achievements, failures. In these conversations, Sinatra spoke of his close yet complex relationship with his father, his conflicts with record companies, his carousing in Vegas, his love affairs with beautiful women, his triumphs on some of the world’s biggest stages, his complicated relationships with his children, and, most important, his dedication to his craft.