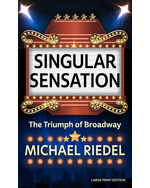 
Singular Sensation: The Triumph of Broadway

The 1990s was a decade of profound change on Broadway. A different breed of producers challenged the grip theater owners had long held on Broadway, and corporations began to see how much money could be made from live theater. Michael Riedel presents the drama behind every mega-hit or shocking flop, bringing readers into high-stakes premieres, fraught rehearsals, tough contract negotiations, intense Tony Award battles, and more. From the bitter feuds to the surprising collaborations, all the intrigue of a revolutionary era is packed into Singular Sensation. Broadway has triumphs and disasters, but the show always goes on.

“A masterful history . . . Broadway aficionados and pop culture geeks will be entertained by this fascinating survey.”

“Riedel is among the cognoscenti for all things Broadway-related. . . . Readers of this breezy, fun, and informative work are the beneficiaries of the rarefied theatrical air of Broadway inhabited by Riedel. An obligatory purchase for all theater collections.”

“Told with all the wit and style readers could wish for . . . Theater fans longing to see a show during this sequestered time will enjoy this entertaining look at what happens before and after the curtain goes up.”

“[A] brisk, insightful, and deliciously detailed take [on Broadway] . . . An entertaining diversion for fans until the curtains rise again.”