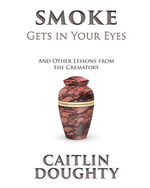 Smoke Gets In Your Eyes: & Other Lessons from the Crematory

An Indie Next
A #1 LibraryReads Pick

Most people want to avoid thinking about death, but Caitlin Doughty — a twenty-something with a degree in medieval history and a flair for the macabre — took a job at a crematory. Thrown into a profession of gallows humor and vivid characters, Caitlin learned to navigate the secretive culture of those who care for the dead. Her eye-opening, candid, and often hilarious story is like going on a journey with your bravest friend to the cemetery at midnight.

"[Doughty's] sincere, hilarious, and perhaps life-altering memoir is a must-read for anyone who plans on dying."