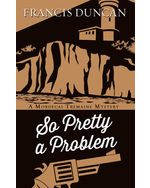 So Pretty a Problem

Adrian Carthallow, a dramatic and talented artist, is no stranger to controversy. But this time it’s not his paintings that have provoked a blaze of publicity — it’s the fact that his career has been suddenly terminated by a bullet to the head. Not only that, but his wife has confessed to firing the fatal shot.

Inspector Penross of the town constabulary is less than convinced by Helen Carthallow’s story, but has no other explanation for the incident that occurred when the couple were alone in their clifftop house. Luckily for the Inspector, amateur criminologist Mordecai Tremaine has an uncanny habit of being in the near neighborhood whenever sudden death makes its appearance. As he mounts his investigation, Tremaine is quick to realize that however perfect a couple the Carthallows may have seemed, beneath the surface of their perfect life lay something much more sinister.

“A final unmasking that suggests Agatha Christie and Rex Stout . . . this leisurely placed cozy, firmly set in beautiful Cornwall, with its quirky, well-drawn protagonist was originally published in 1947 in the UK.”

“Fans of twisty fair-play whodunits will be gratified.”