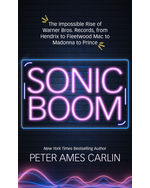 
Sonic Boom: The Impossible Rise of Warner Bros. Records, from Hendrix to Fleetwood Mac to Madonna to Prince

The roster of Warner Brothers Records and its labels reads like the roster of the Rock & Roll Hall of Fame. But the most compelling figures in the Warner Bros. story are the sagacious Mo Ostin and the unlikely crew of hippies, eccentrics, and execs who were the first in the music business to read the generational writing on the wall in the 1960s. Ostin and his staff transformed an out-of-touch company into the voice of a generation. Their story is as raucous as it is inspiring, entertainment that maps a route to that holy grail: love and money.