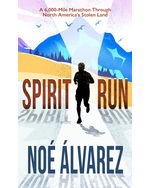 Growing up in Yakima, Washington, Noé Álvarez worked at an apple-packing plant alongside his mother. At nineteen, he learned about a Native American/First Nations movement called the Peace and Dignity Journeys, epic marathons meant to renew cultural connections across North America. Running through mountains, deserts, and cities, and through the Mexican territory his parents left behind, Álvarez forges a new relationship with the land, and with the act of running, carrying with him the knowledge of his parents’ migration, and the dream of a liberated future.