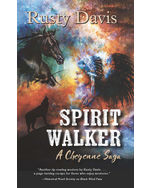 Spirit Walker tells the legend of a time when the spirits walked with the living, resistance never stopped, and dreams lived on even when the dreamers lay cold. It was a time of violence and death.

After their surrender against overwhelming odds in the months after the Battle of the Little Bighorn, the northern Cheyenne were marched from their homeland near Montana to an overcrowded Indian reservation in Oklahoma. Against the odds, spirit warriors arose in defiance. From the misery of a forced march at bayonet point to the squalor of a reservation and to the race for freedom with death riding on their shoulders, the northern Cheyenne refuse to admit defeat, even at the point of death.