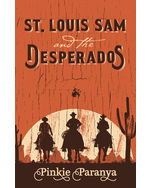 
St. Louis Sam and the Desperados

Going from St Louis, Missouri, in 1874 to the Arizona Territory is a frightening step for brother and sister, Garth and Samantha. They need to prove their uncle Millard Tremayne’s treachery in their father’s financial ruin and subsequent suicide. So far, their uncle holds all the cards — their guardianship and inheritance. Since the uncle is secretly setting up a dynasty out west, eventually to rid himself of his family and waspish wife, Grace, Sam and Garth follow his trail to a town called Powder Keg in Arizona. There, the brother and sister collect a band of misfits to help them sabotage Uncle Millard and his treachery.