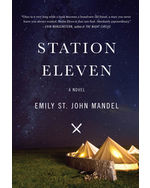 A New York Times Bestseller
2014 National Book Award Finalist
One snowy night‚ famous actor Arthur Leander has a heart attack onstage while performing King Lear. An EMT in the audience performs CPR‚ but Arthur is dead. That same night‚ a terrible flu begins to spread. Set in the eerie days of civilization's collapse‚ this is the spellbinding story of a Hollywood star‚ his would-be savior‚ and a nomadic group of actors roaming the scattered outposts of the Great Lakes region‚ risking everything for art and humanity.

"Ambitious, magnificent . . . Mandel's vision is not only achingly beautiful but startlingly plausible, exposing the fragile beauty of the world we inhabit. In the burgeoning postapocalyptic literary genre, Mandel's transcendent, haunting novel deserves a place alongside The Road, The Passage, and The Dog Stars."

"[An] ambitious take on a post-apocalyptic world where some strive to preserve art, culture and kindness . . . Think of Cormac McCarthy seesawing with Joan Didion . . . Mandel spins a satisfying web of coincidence and kismet . . . Magnetic . . . a breakout novel."

"A unique departure from which to examine civilization's wreckage . . . [a] wild fusion of celebrity gossip and grim future . . . Mandel's examination of the connections between individuals with disparate destinies makes a case for the worth of even a single life."