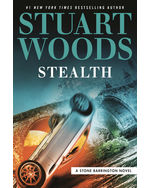 Stone Barrington is trying to enjoy some downtime at his English retreat when he’s unceremoniously sent off to the remote reaches of the United Kingdom and into a deadly snare. As it turns out, this is only the first volley by a rival power, one that has its eyes set on disrupting the peace of the nation. With the help of two brilliant and stunning women, Stone must leverage a new position of power to capture a villain with a lethal agenda. But the closer he comes to nabbing the culprit, the more he realizes there’s a bigger plan at work — and a true mastermind who’s a force to be reckoned with.