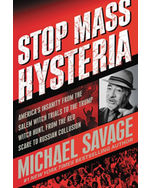 Stop Mass Hysteria: America’s Insanity from the Salem Witch Trials to the Trump Witch Hunt, from the Red Scare to the Russian Collusion

In his new book, Stop Mass Hysteria, #1 New York Times bestselling author Michael Savage not only deconstructs the Left's unhinged response to traditional American values like borders, language, and culture, but takes the reader on an unprecedented journey through mass hysteria's long history in the United States. From Christopher Columbus to the Salem Witch trials to the so-called "Red Scares" of the 1930s and 40s and much more, Dr. Savage recounts the many times collective insanity has gripped the American public - often prompted by sinister politicians with ulterior motives.