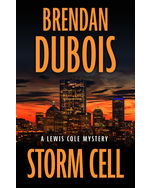 Retired intelligence analyst Lewis Cole is trying to save his friend Felix Tinios from a conviction on first degree murder ― but the former Boston mob enforcer refuses his assistance. With time running out and the FBI nipping at his heels, Lewis is on his own as he desperately tries to clear his friend’s name before Felix departs prison . . . as a dead man.

“Nobody is better than DuBois at kicking his reluctant hero into action or at rooting every complication in something that feels disconcertingly like the normal rhythms of life outside the justice system.”